First itinerary: the district of Borgo and the town centre.

Starting from piazza Plebiscito, with your back to the Basilica, on your left walk along via dei Tribunali (called like this because once there was the courthouse), cross the parking of the Pietrosa and reach the first stop of our itinerary 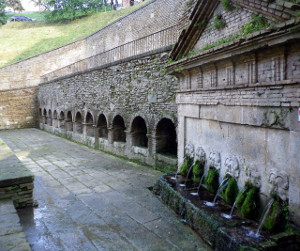 La Fonte Borgo, called like this because one could enter through the destroyed door of Sant'Angelo, is one of the first monuments that attracts tourists' attention when they come to Lanciano.

It was built on the Fosso Pietrosa, near the Aragon walls still visible today together with the Torrione that marked the corners of the city's walls.

Its construction that goes back to Roman times, is documented in the 16th century but it is very unlikely that its present appearance, with stone masks, where water flew underground and 9 series of arches, once used as washhouse, is the result of 19th cent 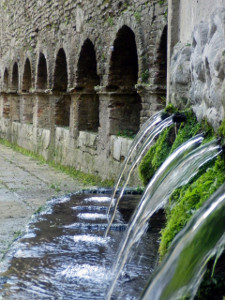 The Fontana di Civitanova it is the only one left of the nine fountains, with two hundred wells within the walls which assured plenty of water to the town.

In 1904 the aqueduct Del Verde was built and running water arrived from Fara San Martino to Lanciano.

In the middle ages the vast and ancient building near the fountain housed the "Ospitium" of Saint' Angelo.

It has been expanded and modified over the centuries; today it is used as a residence and as a venue for craft activities.

Go back until Piazza Plebiscito and, staying on your left go up Corso Roma where after a few metres you will find the Church of Saint Francis. 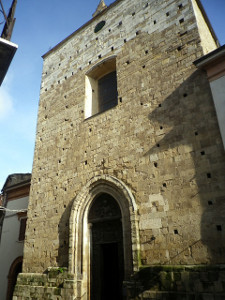 Saint Francis’ church, which holds the Eucharistic Miracle, was built on a preexistent Benedictine monastery given to a community of monks around 750 B.C, they were Catholic priests and they confirm the antiquity.

Today we can see a bare stone frontage crowned with elements of plunder from Saint’Angelo Chapel of Lombard’s demolished at the beginning of the 19th century.

The inside has been renovated ten years ago, and like other churches, it was decorated at the beginning of the 18th century, recent renovations have recovered a room in which a monumental organ was found, a gift from Pope Clemente the 16th and a pulpit built by Modesto Salvini from Orsogna.

The paintings of time dedicated to three biblical heroines, Judith, Rachel and Ester were created by Teodoro Donato from Chieti.

The monumental complex is part of the cloister and the former courthouse building which dates back from 1808 onwards. 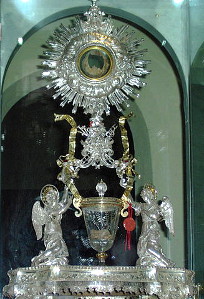 The relics of the Eucharistic Miracle were once kept in the “dark chapel” inside the tower then they were transferred to the altar on the right hand side by the Valsecchi family.

From 1902 they have been kept in a box on the altar designed by Filippo Sargiacomo, where one can contemplate the precious gift of a silver ostensory made by a Neapolitan Silversmith in the 18th century.

During Mass a Basilian monk doubting the presence of Jesus saw the Eucharistic species turn into flesh and blood.

Since the eight century the relics have been preserved in form and were first kept by the basilian monks from 1258 to 1809, when they were forced to leave the monastery due to Napoleonic suppression.

From 1809 the miracle has been held by the Holy rosary Confraternity in the side chapel of Saint Francis’ church.

The Franciscans finally returned to permanently reside in the old church from 1952 and they have preserved it ever since to this day. 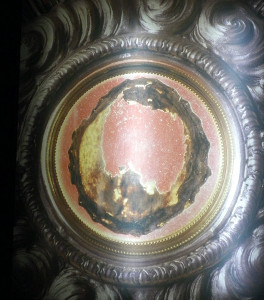 In 1970, 1971 and 1980 the relics were submitted to medical and scientific investigations, giving amazing results.

Tests have established that the host is made of myocardial tissue from human flesh and the blood is real blood of group AB.

The results are as follows.

-The host- is of mesodermal origin recognized as myocardium and endocardium.

-The blood- is real blood.

-The flesh and blood- are of human species.

-The blood group AB is the same as the flesh and blood.

-Normal proteins found have the same as in normal fresh blood.

-In the blood the results showed low levels of sodium, potassium, chlorides, phosphorus and magnesium while there were high levels of calcium.

The visit continues in the museum of the Miracle, from where it is possible to reach the church of Saint Longino and the archeological walk

Saint Longino and The Archaeological walk 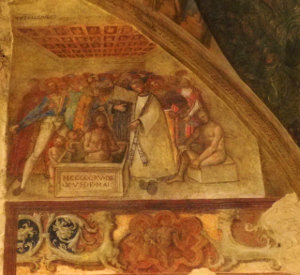 Near the Eucharistic Miracle Sanctuary in Plebiscito square recent work has revealed a huge barrel-vaulted room dating back to the (11th and 12th) centuries from the Benedictines to the present day Franciscans, dedicated to Saint Longino.

There are also some paintings of Saint Antony and Saint John the Baptist and the head of the Virgin Mary.

To your left there is a large square hall once the seat of the brotherhood of the Raccomandati below the sacristy of Saint Francis with paintings about the end of the 15th Century with scenes of Apocalisse.

From the church of Saint Francis it’s possible to reach Plebiscito square where archeological digs have brought to light connecting corridors, passageways and rooms under the existing old Town Square.

Going down some steeps one can reach the area of the excavations conducted in the 20th century.

On the left one can see underground stone structures which held wheat.

On the right there are blocks of stone with signs from the violent earthquakes that hit the town in 1456.

Proceeding along this route which is like a knotted maze under Plebiscito Square you meet the ancient medieval bridge dedicated to the Virgin Maria of modesty instead of the Divine Majesty of the Emperor Diocletian and remains of Imperial Rome.

Going back to the Piazza, you can see the Basilica, that apparently is built on the ground but actually it is entirely built on a bridge, the Diocletian Bridge.

The first bridge was built and intended to go beyond the Pietrosa valley which has been found in archaeological excavation digs in the Cathedral in 1785 and handed down to us by the historian Omobono Bocache, who tells us of a Roman bridge built by the Senate and the people of Anxanum which they dedicated to Diocletian.

The majestic structure that today we can admire is a complex series of work carried out between the 13th and 14th centuries.

The primitive chapel is dedicated to the Virgin Mary.

In 1513, the second bridge was built next to the other one. In 1520 it was covered by vaults so; the upper level was expanded to the church of the Madonna del Ponte.

In 1583 the 3rd passageway, called the corridor, was opened. It was a pedestrian walkway that connected the square to Corso Bandiera.

The bridge for many centuries was the only link between the town and the fair. In 1905 Trento and Trieste Street was built. From 1973 the century bridge was restored to be used as an auditorium for summer music courses.

As a result of this architectural evolution the Italian post dedicated a stamp.

Our visit continues on Piazza Plebiscito where we find the town hall and the Basilica. 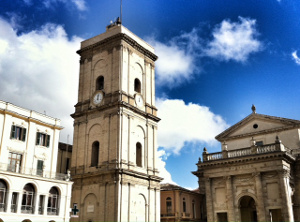 It existed between the cathedral and saint Francis’ church, this gave way to a new starting point for Lanciano in the 20th century.

Overlooking the Unità d’Italia Square is the town hall. The frontage of the square was renovated between 1868 and 1869.

Next to this there is the “Casa di Conversazione”, an institution dating back to the 18th century.

The private rooms at the club were enlarged between 1900 and 1901 and a ballroom was made, below this there was the town’s first cinema, now called The Mazzini Hall.

After the Second World War war the town hall was extended and raised.

The basilica of the Madonna del Ponte 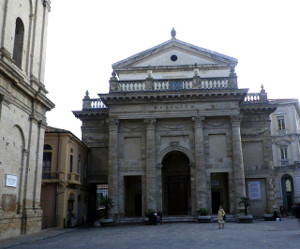 Plebiscito Square’s religious Centre is focused on the Cathedral of Madonna del Ponte, taking its title from being built on the Diocletian Bridge; here there is a bell tower dating back between 1610 to 1621 built by the Milanese Tommaso Gottardo called Civic Tower.

The above floors were used as a prison in secular purposes in 1819.

Eugenio Michitelli from Teramo had the adjacent church demolished to make way for the Cathedral Basilica. There is to this day a plaque in the Square where it once was.

After the 2nd world war Donato Villante drew the drawings for the dome. Thanks to his invention the oldest arcade that was attached from the church to the bell tower disappeared.

Today we can see the inside of the church, thanks to its many inventions from 1785 to 1794.

In those years the high altar of the church, piece of work of the Neapolitan Crescenzo Trinchese, in 1758, that was on the long side of the building in correspondence to the primitive aedicule, where today there’s the chapel of the sacrament Santissima with the painting of the last Supper painted by Tommaso Alessandrino in 1601.

The Neapolitan Giacinto Diana a professor at the Royal Academy of fine Arts in Naples, painted the Vaults, the Dome, the Lunettes and two altar pieces between 1787 and 1793.

In 1806 the artist Giuseppangelo Ronzi from Penne painted the queen of Saba and King Solomon, while on the left hand side of the presbytery, destroyed by a fire in 1933 the original work of David and 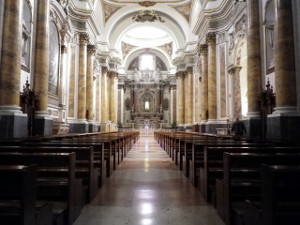 Abigail was substituted by a copy by the painter Francesco De Vincentiis from Chieti.

In a small niche on the altar is the imagine of the venerated Virgin and child in Clay, a work of the early 15th century.

In the niche on the high altar there is the adored image in terracotta of the Virgin with Child, a piece of work from the mid-15th century, an era when popular worship, increased as time went by. Therefore this allowed that from the little aedicule with the image of the Virgin, obtained in one of the merlon built to defend the bridge that in the Middle Ages linked the valley of the Pietrosa with the town centre to the Fair area, we arrived in 1443 to the building of the first chapel that took over the Middle ages bridge in all its length.

Engineer Filippo Saragiacomo in 1870 created the marble pavement, while the stained glass windows were placed in 1912. 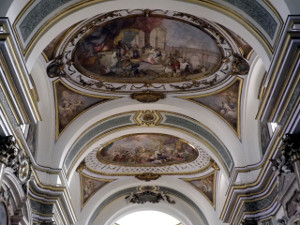 The 14th, 15th and 16th of September there are festivities to remember the crowning of the statue in 1833 with two golden crowns donated from the Vatican Capitolo.

Go to the second itinerary: quarter of Lancianovecchia