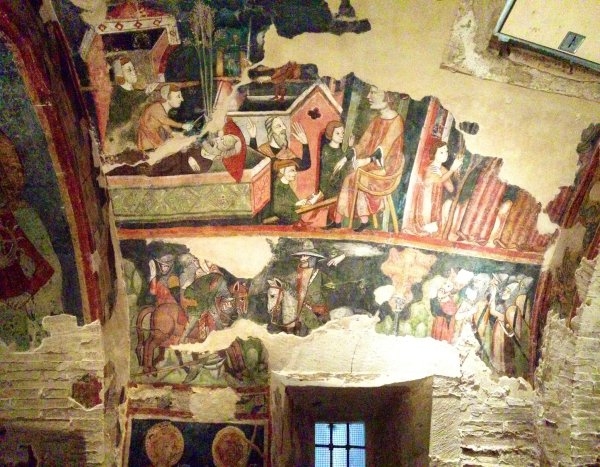 They are placed in a small room under the bell tower of the Church of St. Nicholas. They are dated between the late 1200s and early 1300s.

The Legend of the True Cross The legend, derived from the popular 13th century book on the lives of saints by Jacopo da Voragine, the Golden Legend, is the triumph of the True Cross – the wood from the Garden of Eden that became the Cross on which Christ was crucified. The legend begins with Adam, who, next to die, he sent the son Seth to Paradise to get the oil ofmercy as viaticum of peaceful death. Archangel Michael, however, gave him a twig of the tree of life to place it in the mouth of Adam at the time of his burial (or three seeds in another version). The branch grew and the tree was found by King Solomon who, during the construction of the Temple of Jerusalem, he ordered that the tree be torn down and used. The workers, however, failed to find a place, because it was always either too long or too short, and when they cut to the right size actually became too short, so it can not be used. The workers so they decided to throw on a river, because it would serve as a bridge.

The Queen of Sheba, being to pass through the bridge, recognized the wood and prophesied the future use of the table. Solomon made aware of the prophecy, he decided to bury it. When Christ was condemned, the old beam was found by the Israelites and used for the construction of the Cross. At this point the legend begins to blend in with the history. In 312 A.D., the night before the battle against Maxentius, Emperor Constantine I has the mythic vision that will end, too, to the persecution of Christians: a glowing cross with the inscription "In hoc signo vinces. (With this sign you'll win)" The emperor then decided to use the cross as a banner and his army won the battle of the Milvian Bridge. Constantine so he decided to send his mother Helen to Jerusalem to seek the Cross of the Crucifixion. Helen found a person who knew the point burial of the True Cross. To force him to talk, she threw him into a dry pit, without bread and water for seven days. She convinced so reluctant to reveal the place of burial. Helen could, in this way, discover the three different crosses used on the day of Christ's death. The proof of the cross was that it was used to resurrect a dead man. Then she separated the Cross in different parts, the main one was left in Jerusalem. At the beginning of the seventh century the Byzantine Empire had a profound crisis and suffered attacks from several fronts, especially Persian Empire by King Khosrow II. In 614 the king Khosrow II, after a three week long siege, conquered Jerusalem and stole all the treasures and relics to Ctesiphon. The Byzantine emperor Heraclius collected the whole army and decided to go personally leading his army to defeat the Persians and recover the True Cross. The war with the Persians lasted several years and only in 628 Heraclius defeated, decapitated Khosrow II and obtained the restitution of the Cross that was reported by the same Heraclius (barefoot and dressed as a pilgrim) to Jerusalem 21 March 630 between the people's joy. (Wikipedia).

The Legend of the True Cross in the frescoes of the Church of St. Nicholas
Last modified onTuesday, 09 July 2013 08:49
Rate this item
(1 Vote)
Tweet
More in this category: « The Holy week Frentana Summer Music Festival 2014 »