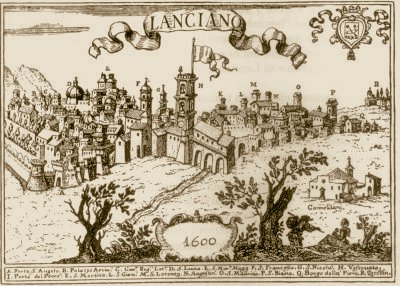 Human presence on the Lancianese territory goes back to the Paleolithic age 30000 years ago, since splinter flints and stone tools from that period have been found in the area.

In 1969 Prof. Alfredo Geniola, from the University of Bari, brought to light a hut settlement called 'Rossi Village' in a digging site in Marcianese and dated it to VI-V millennium B.C.

Recent excavations into the historical centre have instead allowed to date the first settlements into the today urban area between the 12th and the 7th centuries B.C., between the Bronze and the Iron Ages.

This is the period the oldest historians, Giacomo Fella e Pietro Pollidori dated the mythological foundation of the City, due to Solima, one of  Enea's friends who escaped from Troy's destruction.

In Pre-roman times, between the 6th and the 5th century B.C. the Abruzzo-molisan coast was inhabited by Frentans, an Oscan language people probably originated by Sannits, whose many archaeological testimonies, especially feminine and masculine grave goods, are kept into the Archaeological Civic Museum.

In the Roman period, from the 4th century B.C. Anxanum enjoyed a great development and prosperity, thanks to its geographical position in the middle of many important streets and in the 1st century Anxanum became Municipium Romano as demonstrated  by the Roman gravestone found in the 16th century and inserted at the basis of the Cathedral bell tower where it remained till the Second World War when it was recovered into the town hall after being damaged during the bombing on 4th April 1944; notwithstanding its difficult reading, it's considered original and demonstrates that Anxanum had magistrates who were owned by town halls.

Anxanum kept and increased its importance during the Imperial Age, which has left many archaeological traces traditionally including also the bridge entitled to Diocletian; but we have news about this only through a memorial tablet found in the 18th century, even if the archaeological investigation has brought to light structures dated late Roman period (284-305).

Under the Byzantine rule from 538, after the Goths' one in  493 A.D., it became part of the Lombard Dukedom in Benevento in the second half of the 7th century.

If the Byzantine settlement is connected to the presence of a Basilian monks monastery (where the Eucharistical Miracle took place), the construction of a no more existing  fortified structure in the middle of Lancianovecchio is to be connected to the Longobard domination.

After the year 1000, Lanciano entered  a new prosperous period with the Normans. The Emperor Federico II declared free from taxes all the goods intended to his fairs; they were kept twice a year in occasion of the Transhumance, a so important activity for the Abruzzese economy that in 1447 King Alfonso V from Aragona decided to rule it with the institution of the Regia Dogana (Royal Customs) della Mena delle Pecore and the granting of a Mint, since it was the most populous city in the Region.

In 1515 Lanciano was declared Diocese and in 1545 it became an Archdiocese independent from Chieti; but the same period also witnessed a decay in its economic activities, because of the new political assets, of the discovery of America and its effects, and because of the many plague epidemics. In the 1640 its state ownership, the direct belonging to the Neapolitan Crown was brought into question. Lanciano passed to the  D'Avalos family but the City appealed and a long case started and lasted almost until the last part of the following century.

The recovery in  politics started by Carlo 3rd  from Borbone had great positive effects on Lanciano  too. The 18th century constituted an actual Renaissance period for the city, culturally, artistically and economically speaking.

It's the century of the great artistic site of the Madonna del Ponte's Cathedral, but also of the gradual agrarian  reorganization, of the big cultural personalities as the musician Fedele Fenaroli, born in1730, the jurist and intellectual Pasquale Maria Liberatore born in 1763, the historian Gennaro Ravizza born in 1766 and many others.

In the French decade Lanciano became Sangro Department capital, including the area of the Region below Pescara river and since 1808 it has been hosting the Abruzzese Appeal Court.

During the Restoration, Lanciano was well known for its 'turbulence' and not well considered by Neapolitan Kings, and only the Italian Unity gave back to the City its importance, especially in economy.

With the progressive urban enlargement in 1879 and the construction of important infrastructures as Verde's Waterworks, the Sangritana Adriatic Railway, a lot of commercial and proto-industrial activities developed, from the hemp working to the production of earthenwares and to the actual factories as Torrieri Brothers' stocking factory, the Rocco Carabba's  printery and publishing house until the opening of the big tobacco factory.

It's an industrial and modern City that on  6th October  in 1943 made some of its youngest inhabitants protagonists of one of the most famous events of the Resistance in Abruzzo.

That day, in an instinctive way, the whole population rebelled against the Germans, helping a group of partisans who were fighting against the enemy. The sacrifice of the eleven October Martyrs has granted a golden campaign medal  to the city.