Third itinerary: the quarters of Civitanova and Sacca

The quarters of Civitanova and Sacca are set on a hill opposite the Basilica.

You can reach them crossing the numerous little streets (called Vichi), we advise you to go up via Corsea, the road that starts on the left behind the monument dedicated to all the deceased in the Second world war, and from there we suggest you to take the stairs on your right called salita dei Gradoni.

Once you are at the top of the stairs, turn left, and after a few metres there will be in front of you the majestic church of Santa Maria Maggiore. 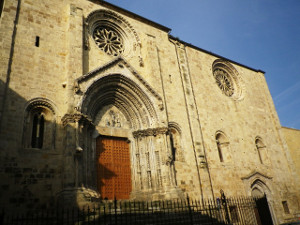 Santa Maria Maggiore is one of the most well-known and important churches in Abruzzo. It was reconstructed in 1277 in a Cistercian- gothic style on a previous 11th century structure whose original Romanic portal has been recovered during the restauration at the end of the ‘60s and inserted in the external narthex on the side of Via Garibaldi. The plant had two tower bells in origin; the only survivor is decorated with three light windows. The church has a three internal naves plant ending in a Presbyterian nave with an octogonal dome.

In 1317 Francesco Petrini, exploiting the inequality between the lower street and the church plan  and leaning against the two buttresses supporting the dome, created on the eastern side, the monumental portal rising over a wonderful flight of steps whose deep embrasure is decorated with little columns and other sculptures. In the lunette of the 14th century portal there is the group of the Crucifixion and the inscription with the date and the signature of the artist. The rose window, with some little columns on its sides, opens up over the portal enriched by two slim lateral double lancet windows. 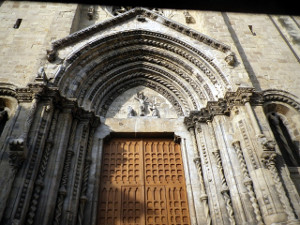 Until some years ago, the portal had been keeping the original wooden leaves which have been substituted by new ones (because of their bad state of conservation); these new leaves have taken up the old design while the original ones have been placed inside the building.

The left side of the front is the most evident testimony of the transformation the building has gone through during the 16th century, when it was enlarged using material from the original building , also including  the gothic portal  from the 13th century part that, together  with the side portal now opening on via Federico Spoltore, connects the building of Santa Maria Maggiore to the  Emperor Federico II’s sites and in particular to the constructive typologies typical of Castel del Monte. The two windows and the second rose window with evident elements of classical inspiration, can be clearly referred to the Renaissance.

At the end of the ‘60s, the interior of the church was restored to recover the whole gothic church reconstructing ex-novo the left aisle of the medieval church destroyed during the 16th century enlargement in order to create a new and great nave being the central axis of a complex three nave structure with two rows of side chapels belonging to the most prestigious families in town.

But the drastic restoration  ended in  damag 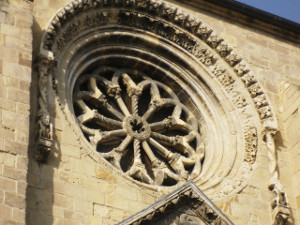 ing seriously the conservation of all the 16th century

enlargement whose important artistic elements have recently been directed  to a consolidation and recovery project.

Santa Maria Maggiore  is very rich in masterpieces but many of them are not open to the public.

In the Presbyterian area, apart from  the baptismal font and the altar piece portraying the Assunta  by Giovannagelo Ronzi, there are also the precious triptych of the Madonna con Bambino tra San Nicola di Bari e San Tommaso, attributed to Girolamo Galizzi from Santacroce and the extraordinary processional silver cross by Nicola da Guardiagrele, a goldsmith masterpiece dated 1422.

In the superior part of the 16th century area  there’s the oratory of the Confraternita di Maria Santissima della Pietà e Concezione dating back to the end of the 18th century; visitors are not allowed inside.

Continuing on the left, along via Garibaldi, you arrive in Largo dell’Appello, where there are the Diocesano Museum and the Torri Montanare. 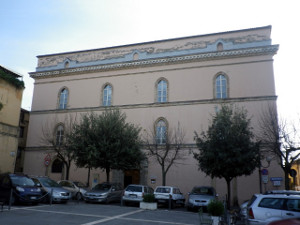 The place in front of S. Giovina’s Church is said ‘the appeal place’ because during the Napoleonic period the building, already used as a seminary, was intended to host Abruzzo’s Court of Appeal. Besides the Curia offices, the Library and the Diocesan archives, since 2002 it is has hosted the Diocesan museum which is for sure one of the most important and richest holy art museums in the Region.

The exposition is developed in nine rooms and over more than 1000 square metres and gives the possibility to admire testimonies from centuries of Frentan church history; paintings, sculptures, goldsmith pieces, sacred paraments, ex voto, wooden furniture, pieces of embroidery, manuscripts, precious bindings, datable between the 13th and the 20th century.

The goldsmith area is really worth visiting, with masterpieces like Nicola da Guardiagrele’s cross, the almost contemporary Sulmona school pastoral staff, and the pontifical jug dated 1630 and probably made in Naples.

Not less important is the fabric area with the 19th century wonderful sacred paraments belonged to the Archbishop Francesco Maria de Luca,  and the astonishing wall hanging  dated mid-18th century and measuring almost 50 square metres, painted and embroidered, given as a present to the Cathedral by the same Archbishop.

Among the many paintings there are some particularly worth noticing; the Cristo Portacroce made in the first 16th century, the Madonna col Bambino by Iacovo de Lanziano  who must have lived in Venice in the 15th century, and Giacinto Diana’s sketch made for the lost fresco decoration on the Cathedral dome and dated  end of 18th century.

In coincidence with the 2009 earthquake the piece of Madonna col Bambino tra San Giovanni e San Nicola, a masterpiece by the ‘500 Lancianese painter Polidoro da Lanciano, has come back into the museum rooms.

Among the sculptures, there are in particular a Madonna col Bambino from the Abruzzese school of the end of the 13th -beginning of 14th century and another Madonna by an Abruzzese painter from the first half of the 15th century. 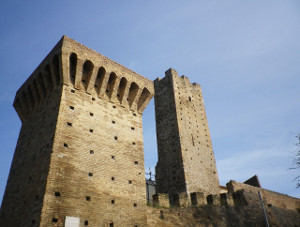 The fortifications to defend the western side of Lanciano, the only part of the city that couldn't be defended by the huge bastions surrounding the rest of the area, developed gradually, starting from the 12th century until the first years of the extension of Civitanova neighbourhood, before known as the 'Vallebona quarter'.

The two sides of the walls present different constructive characteristics; in the most ancient part, over the valley, the structure is made of bricks and stones. In the part continuing till Malvò's inlet and  S. Chiara's door, and connecting to the Aragonese Tower, the wall still appears today in brickworks, and this allows to date it together with the lower tower ( with clear 15th century characteristics) to the restoration of the defensive system made in the Aragonese period, about 1480.

The higher tower, instead, having its side open to the interior in order to avoid its use against the City in case of conquest, is what remains of the most ancient defensive system that made possible the control of the Piana dei Cappuccini and all the Feltrino valley. 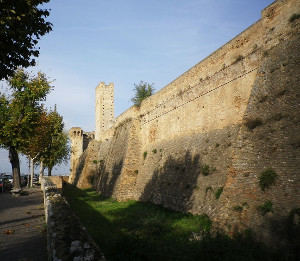 People fantasy has it that on the site of the tower there used to be, in the high-medieval period, Jehan de Lanson's castle, the legendary Carlo Magno's paladin whose adventures are told in a Chanson de Geste kept in the National Library in Paris and dated 13th century.

Near the tower there was one of the nine doors, called 'Santa Maria la Nova' after the name of the church nearby today known as S. Giovina.

Notwithstanding the presence of these huge fortifications this was the we

In fact in 1423 Muzio Attendolo Sforza, commander of mercenary troops defeated Braccio da Montone and took possession of Lanciano opening its way through the wall near S. Chiara.

Today, they do no longer serve their defensive function, the Torri Montanare are one of the most beautiful views of the town and the area inside is used to host open air concerts of the Frentana Musical Summer. Looking down from the stands there is a picturesque landscape of the  Sant'Egidio Contrada, where there is the homonymous church and the Civitanova Fountain.

Walking back, going back down via Garibaldi, you arrive in the Sacca quarter, at the end of which there are the churches of Saint Nicola and Saint Rocco.

The Church of S. Nicola 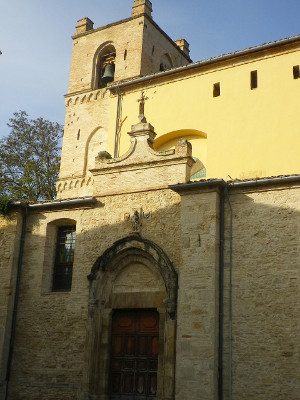 The church dedicated to Saint Nicola from Bari, parish in the Sacca quarter, was built in 1242 on the site of the Saint Pellegrino Church, destroyed by a fire.

The entrance on via Garibaldi is formed by a gothic portal surrounded by a sculpture showing Saint Nicola between the coat of arms of Lanciano and the one of the Ricci family.

The bell tower of the 13th century has conserved on the outside an elegant mullioned window with two lights and traces of polychrome ceramic basins, placed between the arches of the cornice and it is certainly the most interesting part of the building, which is rather plain.

The interior, which is of neoclassical inspiration, was completely rebuilt between 1854 and 1881 by the engineer Filippo Sargiacomo, who carried out the raising on the central nave and projected the decorative plaster apparatus.

The presence of a baptismal font, whose surface is full of paintings and carvings, and of an ancient stone  stoup is noteworthy.

In 1993 inside a chapel at the base of the bell tower, a precious cycle of frescoes, with different images referring to the legend of Vera Croce and some figures of saints, carried out between the second half of 1300 and the first half of the following century were discovered.

Download the ebook guide about the Vera Croce frescoes

The Legend of the True Cross in the frescoes of the Church of St. Nicholas

Among the precious furnishings of the Church there is a reliquary from 1456, a piece of work of Nicolaus de Franca, in silver, finely chiseled with golden lamina and a painting of Saint Michele Arcangelo painted by Federico Spoltore in 1944. Once this building held the only painting attributed to the painter Polidoro from Lanciano that today is kept in the Museum of the Cinquecentesco Castle in L'Aquila.

The small but very old chapel dedicated to Saint Rocco is adjacent to the parish church of Saint Nicola.

The external part of the building, started in 1863 by the engineer Filippo Sargiacomo, shows a clear classical implant and the use of bricks.

The interior shows elements that allow us to date it  back to the 13th Century but the first written evidence of this chapel dedicated to the pilgrim Saint, together with Saint Saebastian against the plague, is dated to 1560 while the formation of the brotherhood of Maria Santissima della Pietà and Saint Rocco is documented since 1579.

The festival in honour of Saint Rocco takes part on the 16th of August and on that occasion inside the Church wax moulds of anatomic parts, ex voto of faithful followers that received a healing grace are placed on tables.

During the festivity blessed bread is distributed and consumed.