The Candelora festival, is exactly 40 days after Christmas and it is called the purification of Mary, because according to the Jewish tradition, after giving birth, a woman was considered not pure for the period of 40 days, and after this period she had to go to the Temple to purify herself. This festival is quite suggestive  because it is celebrated in the church of Saint Biagio, on the eve of this Saint’s festival, with the distribution of little slim candles that traditionally are lit during storms and downpours to avoid the damage of lightening and hailing.

The day after, is the day the Catholic Church celebrates the Bishop Saint Biagio, guardian of the teaser’s corporation and rescuer of sore throats, the people from Lanciano, go in a spontaneous pilgrimage to the church where the rite of anointing the throat is celebrated. 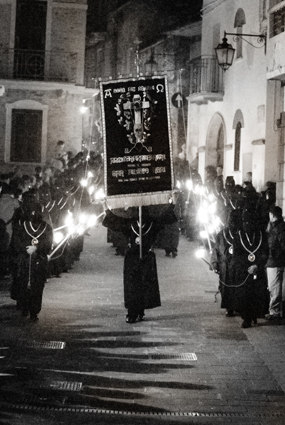 The celebrations for the death and the resurrection of Christ have taken on in the course of the centuries great importance in the township’s history and is still felt by the entire population.

The processions on Maundy Thursday and Good Friday, that have been organized since the fourth century are very suggestive.

On Maundy Thursday, while the population is busy in the rite of the Sepulchres, visiting all the churches of the town, the brothers of the Morte and Orazione brotherhood of Saint Filippo Neri, with their faces covered by a black hood and wearing also a black tunic, with a slow pace walk the streets of the town that are lit only by candles. They are followed by the music band that plays the Miserere by the musician Francesco Masciangelo, one of the members of brotherhood, chosen as an old habit by the Prior, who repeats the choice of Simone from Cirene, that barefooted carries a cross through the town.

The Good Friday procession, opened by the coats of arm of the brotherhood, the so called  “pannarola”, takes place with the brothers and sisters of the Pio brotherhood wearing no hoods form  the wings to the Cyrene that carries the cross, and they carry on their shoulders the traditional symbols of Christ’s passion, the statues of the three Marys and the dead Christ, the adored simulacrum whose era and origin is surrounded by mystery and legend.

When the procession walks through the streets everybody is silent and silence is only interrupted by the rattling of the clapper and by the moving notes of the Miserere by Masciangelo.

The meeting of the Saints takes place in the Plebiscito square, at midday on Easter Sunday and sees as protagonists the three simulacrums of Jesus, Mary and Saint John, each one carried by the members of a brotherhood, that bow to each other in a kind of reciprocal salute.

The statue of Saint John, carried by the members of the SS. Simon and Giuda Taddeo brotherhood and Maria Santissima della Consolazione, moving from the church of Saint Augustine goes towards the statue of the Madonna, still covered by black mourning veil, carried by the members of the Santissimo Rosario brotherhood from the church of the Anime Sante of Purgatory to the square.

For three times the group of the SS. Simon and Giuda Taddeo brotherhood move backwards and forwards to try and convince the Madonna that Christ has really resurrected but only at the last attempt and at the “sight” of the Saviour, whose statue is carried by the members of the brotherhood of Maria Santissima della Pietà and Concezione, the statue is freed of the black veil and dressed in white and green and runs through the flying doves and the tolling of the bells towards the statue of the Redeemer.

Similar sacred representations take place also in other towns in Abruzzo but in Lanciano it has the particularity to be reenacted on the Tuesday following Easter.

September in Lanciano is a group of events and manifestations that through the years have overlapped the older celebrations of the opening of the fairs and the Marian festivities of the month of September that traditionally starts with the fireworks on the 29th of August, which is the beginning of the solemn novena in honour of the Madonna del Ponte whose festivity is celebrated on 8th of September.

At sunset on 31st of August the  Festival of Sant’Egidio takes place, or known as the toy festival, because of the presence of many hawkers that with their toy, objects stalls are the heirs to the farmers and small artisans that used to sell their objects for children like baskets, sweets, terracotta objects like pots, money boxes and bells that have become the real symbol of this festival.

During this festival tradition wants that boyfriends and girlfriends or friends exchange presents and in time the most widespread object, symbol of the festival and of the town of Lanciano, has become the bell modelled in different shapes and dimensions, or in the traditional shape with the traditional decorations with coloured stripes.

At midday on the 1st September, when the fireworks and the flag hoisting of the bell tower of the Madonna del Ponte remember the old celebrations of the opening of the fair, on the square there still some stalls selling bells.

The historic re-enactment of the procession of the  Mastrogiurato has taken place in Lanciano since 1891, on the first Sunday in September.

The mastrogiurato was a political-juridical position created by the Angioini in 1304 and stopped being used in 1806.

He was elected by the citizen parliament every six months, choosing among doctors and rich middle-class, experts of law and had a good reputation, he would work alongside of the mayor in the administration and the policy of the town.

The great prestige that this role acquired in Lanciano is due to the fact that during the fair period the Mastrogiurato had the powers that ordinary belonged to the citizen parliament such as the organization of the fairs, the people’s and good’s safety, the respect of the priviliges given to the merchants, and the solution of problems originating from the fair.

The re-enactment occurs on the first Sunday of September after a rich week of events and manifestations with a medieval character. The investiture ceremony, which sees the involvement the participants  of the four quarters in historic costumes takes place in Piazza Plebiscito where the chosen person among the most representative citizens of the Frentan area in the political, economic and cultural field takes the oath by reading the ritual formula and later, preceded by clarions and drums, flag throwers and warriors and followed by the participants in the costumes of the period, forming a great procession of over two hundred people that reach, going through corso Bandiera, the site where once the Mastrogiurato, after raising the flags of the town and of the Kingdom, which indicated the beginning of the fairs in Lanciano.

The 8th of September, day of the Nativity of the Virgin the inhabitants of the thirty-three districts of the town reach the town centre and form and ordered and picturesque procession the Madonna del Ponte, protector of Lanciano, the products of the fields as a thanksgiving for the harvest and as a propitiation for the future agriculture year.

The devoted pilgrimage is called the “Dono” and its origins are still not known today, it used to be less spectacular than it is today, because nowadays there are some allegorical carts from the countryside world in what used to be a female procession with religious songs. The women would carry on their heads traditional copper bowls full of wheat and decorated with paper flower bouquets, recalling  suggestions of ceremonies a lot older than Christianity.

Since 1833, the year when the 15t century statue of the Virgin del Ponte with Child, was crowned with two golden crowns donated by the Vatican Capitolo solemn celebrations are held every year on 14th, 15th, 16th of September to remember this event.

At 4 a,m on 14th, there is a spectacular “opening” of the festivities with a huge firework display followed by the lightening of the illuminations along Corso Trento e Trieste transformed by te arches in a unique and suggestive bright gallery.

The celebrations carry on for three days and three nights, with  musical shows, cultural events, religious celebrations and firework displays and until a few years ago the famous horse races.

The tolling of the little bell, called the “Squilla”, placed on the top of the tower bell of the Madonna del Ponte, between 6pm and 7pm of 23rd December, accompany the development of the tradition that has taken its name from it.

During the first hour after sunset, in the continuation of an old solstice ceremony the people from Lanciano, faithful to the tradition gather in their homes to renew the tradition of kissing the hands of their parents or the elder members of the family and exchange gifts and remember the dead ancestors.

At the beginning of the 17th century, during the tolling of the bell the bishop Tasso, inaugurated a new devotional practice walking from the little church in Iconicella, three kilometers far from the town centre, that reminds us of Joseph and Mary’s journey to the  grotto in Bethlehem.

The festive sound of all the bells in town, after the tolling of the little bell, signaled his entrance into the bishop.