Visit Lanciano tourism, culture, traditions and shopping - the site of tourism in town

The group "Le Vie del Commercio", the Popular Bank of Emilia Romagna and the local administration of Lanciano welcomes you to our town. 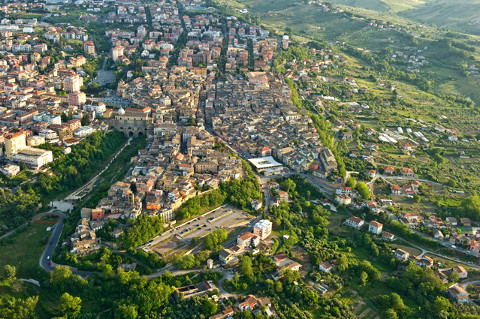 Whoever comes to Lanciano hardly ever imagines being in a town rich in historical monuments of exceptional beauty.

Lanciano maintains its historical importance over the centuries with its local fairs.

Since ancient times Abruzzo has been characterized by the sheep farming, due to scarcity of arable land, Lanciano is at the crossroads of two major paths of the tratturo, the great grassy paths on which flocks of sheep, seasonally, migrate from the highlands to the sea and from the sea to the mountains.

Already in Roman times, when its name was Anxanum, the town experienced a new development during the middle ages, thanks to the port of Ortona, an important commercial basis used by the Venetians in the Adriatic; its fairs became a privileged place of encounter and exchange.

The town's wealth grew until it became the first town in Abruzzo for population with its quarters of Lancianovecchio, Civitanova, Sacca and Borgo, which extend in a fan around the Square; these are enriched by monuments, magnificent mansions of the great merchant families and feudal nobility of

We advise you to take a guided tour of the town divided into three itineraries each one lasting one hour, all starting from Piazza Plebiscito, situated at the end of Corso Trento e Trieste.

Place yourself at the centre of the square, with your back to the Basilica and observe:

On your left there is the Petroso hill (where our first itinerary takes place), with the Church of di Saint Francis the home of the Eucharistic Miracle,

And opposite the Selva Hill with the districts of Civitanova and Sacca (third itinerary).

In the next sections you can find information on the history and traditions of Lanciano.

On visitlanciano.com you may find also a free tourist ebook-epub guide

We wish you a good stay in our town.